Mime Your Own Business

Jerry is invited to work for a spy film. What he does not know is the director is Marco Lumiere in disguise, and he plans to take revenge on the producers that refused to finance his films.

In the B-story, while Jerry is absent, the spies are made the temporary directors of WOOHP.

Samantha, Alexandra, and Clover are displeased by the spy movie.

Jerry talks about his Hollywood debut.

Jerry dreams about his film career.

Clover's biggest reason not to want to run the agency: Boys

Jerry leaves running WOOHP to Sam, Clover and Alex much to their displeasure.

The spies have no idea how to fly the jet.

Alex is against littering.

Clover complains about the files she's having to deal with ruining her manicure. 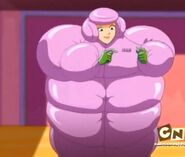 The girls realize Marco Lumiere is the director.

Sam, Clover and Alex are shocked to learn how bad they are at running the agency when they receive complaints from many agents and G.L.A.D.I.S.