Black Widows is episode 16 of Season 1.

The girls investigate the disappearance of the Honeybees, a high school cheerleading squad from California who're the California state champions and have won the national cheerleading competition the last ten years in a row. They're sent undercover as the WOOHPettes, the new California state champions, and they place 3rd in nationals (a squad from Texas got 2nd place), and the 1st place winners were the Black Widows, a new squad. Sam notices that the routine was very familiar (it was the same exact routine as the Honeybees), and the girls follow them to investigate. In the B-story, Mandy competes against Sam in the Beverly Hills High annual spelling bee.

Goof: Black Widows judge's scores are identical to the WOOHPettes

Honeybees on the bus.

Sam tries to convince Alex and Clover to sign up for the Spelling Bee with her.

Clover is certain Sam will win the Spelling Bee.

Mandy tells Clover, Sam, and Alex that she is going to win.

Mandy tells the girls she only wants to win to prove that she's the most stylish, most popular and smartest girl in Beverly Hills High.

Clover unhappy about having to visit the library.

Instant Hair Helmet In A Can demonstration.

Sam loathes the idea of having to pose as a cheerleader unlike Clover and Alex.

Off to the mission.

Sam unhappy about being a cheerleader while Alex and Clover are thrilled.

Clover saying she loves this mission.

Samantha and Clover at odds about cheerleading. Sam says it is a brainless, pointless activity while Clover insists it is an important, competitive sport.

Samantha, Alexandra, and Clover in costume.

The spies learn that a lot of cheerleaders had a grude against the Honeybees.

Alexandra stunned to see how happy the other cheerleaders are that the Honeybees have gone missing.

Clover is shocked as well.

Sam, Clover, and Alex realize everyone is a suspect.

Samantha once again annoyed at Clover's dreams to become a professional cheerleader.

Alex and Clover enjoy the spotlight while Sam is embarrassed.

Black Widows barge in at the end of the competition.

Clover, Sam, and Alex find the Black Widows to be superhuman and scary.

Samantha feels there is something very familiar about the Black Widows' routine.

Black Widows win the national championship and advance to the World Cheerleading competition.

The Black Widows' coach Candy Sweet insists on no more questions, saying her team needs to start training for the world competition immediately.

Mini Locket Rocket in use.

Lip Stick in use.

Lip Stick allowing the spies to stick to the helicopter as it takes off.

Lip Stick causes a problem as Alex is unable to unglue herself from the side of the helicopter.

Metal Cutting Laser Ring in use.

Samantha impressed with the Metal Cutting Laser Ring and wanting to get one for her dad. 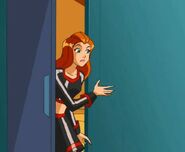 Sam, Clover, and Alex realize the Black widows are androids.

Candy Sweet attended the same high school as The Honeybees.

Samantha, Clover, and Alexandra about to have their minds wiped out.

Instant Hair Helmet In A Can saves the day.

Instant Hair Helmet In A Can at work.

Mandy panics at the sight of so many people.

Goof: Alexandra has the same hairstyle as Clover

The spies are carried to Candy Sweets lab