Boy Bands Will Be Boy Bands

Boy Bands Will Be Boy Bands

Boy Bands Will Be Boy Bands is episode 8 of Season 2.

The spies are sent to investigate the hottest new boy band, Teensicle, when several band members begin to mysteriously disappear. When the band members resurface unaffected, the spies detect strange changes in their personalities. It turns out that the members of a washed-up boy band called Boy Candy are stealing the current pop stars' faces in order to revive their has-been careers.

In the B-story, Mandy's throwing a pool party to celebrate her getting a tattoo, and invites Sam and Clover but not Alex, feeling that she isn't "cool enough" to attend. Alex contemplates getting a tattoo, but in the end she doesn't and goes to Mandy's party anyway. After Mandy tries forcing Alex to leave the party, Alex gets angry and shoves Mandy into her pool. Mandy's tattoo gets all smudged and runny, showing it was actually water based ink, and everyone leaves. 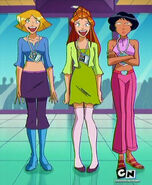 Clover and Samantha drooling over Teensicle 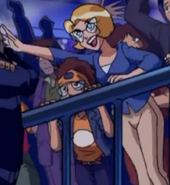 O-Dog and D.J. talking to the spies. 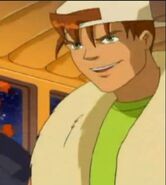 Fans cheering at a Teensicle concert.

Fans cheering at a Teensicle concert

Clover: (after Mandy has just fallen into the pool and her tattoo gets runny) Oh, my gosh! Look at her tattoo.
Party-goer: (about Mandy) Her tattoo’s fake. What a poser.
Party-goer: Yeah; let’s get out of here. (Everyone starts leaving)
Mandy: (gasps when she sees what happened to her tattoo) Wait! Don’t go! I’m just as surprised as you guys! (She gets out of the pool and chases after her departing guests) The directions on the box said it was permanent ink!
David: (to Sam, Clover, and Alex as they turn to him in surprise) Can you believe Mandy? What a fake.