To become a dancer

Brick is revealed to come from a long line of dancers, and while his dream is to became one it's also revealed that he was literally born with 2 left feet. In an effort to find himself a perfect "right foot" he kidnaps several dancers. He selects Alexandra in his dance audition to join him in his final show. Backstage, she is abducted by Brick's machine. Clover and Sam investigate the kidnappings by shrinking themselves using the Incredi Shrink Compact Hair Dryer. They are captured by Brick, and still tiny are tied up in a pair of shoes. Brick reveals his motives and reveals that the "right foot" he's been looking for it Alex's. He switches feet with Alex. Clover Sam finally return to their normal size, while Alex struggles to control her Brick's left foot which is now her own.

The girls try to stop Brick but it backfires. Then Clover and Sam manage to tie Brick after engaging in a Cossack dance. Alex finally is able to freeze him using the Mentos Scented Freezespray Hairspray and puts a stop to his final performance. He is taken to WOOHP Prison in his frozen state. 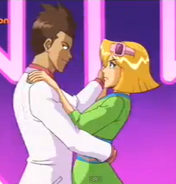