Evil Gymnasts is episode 8 of Season 5.

When Jerry decides to take a vacation in Europe, he brings the girls with him to work out of WOOHP's European office in Paris, France; which is located under the Eiffel Tower. When a Romanian women's gymnastics team suddenly goes missing, Jerry sends the girls in to check it out. They find a woman who is obsessed with winning the gold, regardless of cost.

In the B-story, Alex contacts a distant relative, only to find out, after participating in a few embarrassing "family customs," that she's got the wrong person. This is part 1 of the European mission arc.

Nadia in the shadows.

The professor of “Dead Languages 101”

Jerry Lewis in a beret.

Sam, Alex, and Clover are excited to go to Paris with Jerry.

Arriving at the Paris branch of WOOHP 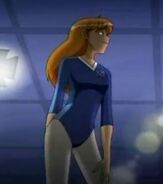 All The Rage Expanding Wig Cage

Clover loves being in Paris.

Laser Lipstick in use.