People around the globe are mysteriously found frozen in blocks of ice, so Jerry sends the spies to investigate. As the girls follow leads to nab the perpetrator, they ultimately discover that the person behind the attacks is a wanna-be figure skater named Ice-Solina. Her plan is to take out the competition using her high-tech ice-skates while broadcasting her own figure skating competition where she is the only winner. Can the spies stop her before she ruins the environment and puts everyone into a deep freeze?

In the B-story, Alex's father is a guest lecturer at Malibu University.

The spies with Alex's father. 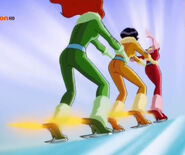 The girls with the figure skaters.