Gerald James "Jerry" Lewis is the founder and leader of WOOHP, the World Organization Of Human Protection. Jerry is voiced by Jess Harnell in Season 1 and Season 2; and by Adrian Truss from Season 3 to Season 6.

A middle-aged, very serious British gentleman, he's responsible for briefing the girls on their missions, as well as for providing them with their gadgets at the start of each episode. He also has a tendency to send the girls on "test missions" without telling them that they're not real missions.

He started WOOHP in the 1970s. ("Forward to the Past") Although he is primarily an office worker, he has participated in a couple of the girls' missions. Despite his thin and non-athletic appearance, (except in "Passion Patties", where he becomes obese), he has in fact demonstrated highly impressive combat and piloting skills superior to those displayed by the girls themselves, including running up (and down) the side of a building. ("A Spy is Born II")

Despite being the director of a spy organization, WOOHP security is surprisingly lax and has been breached on multiple occasions. And despite being a master spy himself (or perhaps due to the pride that comes with his skill); he can be oblivious, inattentive, and overly trusting. This is especially true in situations where the girls are right and he is wrong. ("The Fugitives", "Spies vs. Spies", "Feng Shui Is Like Sooo Passe", "Super Agent Much?", "0067")

It's also revealed that he actually enjoys WOOHPing the girls (a term meaning a way of suddenly transporting the girls to WOOHP that usually if not always breaks the laws of physics), a constant annoyance to the girls. However, in "Evil Pizza Guys" the spies took great pleasure in WOOHPing him themselves.

WOOHP surveillance on its agents is so pervasive, as quoted by Clover, "not a single inch of their lives he is not trespassing on". ("Evil Roommate")

At times he shows judgmental behavior, making assumptions and not considering other evidence. Such as when the spies are accused of a crime.

His mother, Lewis, was introduced in "Mommies Dearest". A helicopter parent, she is unaware of Jerry's job at WOOHP as he has told her, as a cover-up, that he actually owns a hotel in Beverly Hills. As such, she finds his erratic behavior around her (caused by his WOOHP job), such as "talking into wallets" and going onto the roof (to talk to the girls) as a reason to keep an eye on him.

In the season 5  finale, his mother reveals that she was also a spy when she was a young woman before turning to the path of evil (caused by drinking the evil-gene that had accidentally spilled into her tea).

Jerry is somewhat cursed in his personal life in that all the people he relates to keep turning out to be super villains. Boogie Gus, Myrna Beesbottom, Terrence Lewis; have all been revealed as villains attempting to kill Jerry and/or destroy WOOHP.

At the end of "Totally Dunzo", Sam, Clover, and Alex tell Jerry; that they are going to miss him because he is like a grandfather to them.

Whenever he is in his office or the WOOHP building, he is usually wearing a suit that is defined as informal attire. However, he is also seen in clothing that runs all levels of the Western dress code.

Alex is one of his super spy agents. He had been watching since her childhood as a candidate according to "Evil Promotion Much?".

Clover is one of his super spy agents. He watched her since childhood as a candidate for WOOHP.

Like Alex and Clover, Samantha is one of his super spy agents. In "Evil Promotion Much?" it is revealed Jerry had been watching her since her childhood, as a candidate for WOOHP.

In the episode "Alex Quits" it was revealed she was a new recruit chosen by Jerry. She was sent to Australia in "Evil Hotel". It is not known how close the two are, but Jerry clearly cares for her. When her Jet aircraft crashed in "Escape From WOOHP Island" Sam, Clover, and Alex were sent as a rescue team.

At the conclusion of the Blaine arc, Blaine joins WOOHP and is assigned to the Australia branch by Jerry. Jerry also sent Britney to be his partner, which proves Jerry trusts Blaine enough to work well with Britney in the episode "Evil Hotel". Jerry was also the one who informed Blaine that Clover was not evil in the episode "Another Evil Boyfriend".

In the Season 1 episode "Spies vs. Spies" it was revealed they were the previous spy team who worked under Jerry seven years before said episode. Jerry had believed them to be dead, when he discovered they were alive there was a very sweet moment between the four of them. This implies that they probably had a similar relationship to Jerry as Alex, Clover, and Sam do.

In Totally Mystery Much? it was revealed by Jerry that he and Martin Mystery's boss M.O.M go "way back". Over a tea break in his office, Jerry asked Martin how M.O.M. was doing and was eager to know if she "talked about him much." He mentioned that he remembered quote, "The cutest thing she'd said to him once." When Martin took off, Jerry ended the conversation by calling after him and saying quote, "Do tell M.O.M. I said hello!"

Later while discussing the mission with the girls and Martin respectively, Jerry and M.O.M ended up seeing one another through Alex and Marin's communication devices. They immediately paused and smiled upon seeing each other then got into a discussion about the last time they saw each other which was three years ago at the Secret Organization Conference in Venice. M.O.M giggled in response and asked him if that was in "Venice or Oslo" indicating they'd met each other before in other places also. Alex became uncomfortable with their obvious flirting back and forth saying eww and asked Martin to end their calls before they ended up hearing something they'd "never forget."

At the end of the episode while checking herself to see if she was back to normal from her Yeti transformation, Clover asked Sam if she was sure the formula Jerry had prepared had worked or not saying quote, "You know Jerr doesn't exactly focus when M.O.M's around!"

He was in the episode "Déjà Cruise". He was really Jerry in disguise, testing the spies' ability to pass the WOOHP Super Agent Human Assets Test.

He was in the episode "The Getaway". He was Jerry in disguise, who was testing the spies in the WOOHP Annual Field Test. 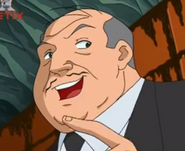 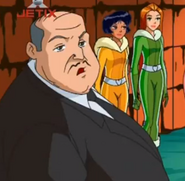 Jerry gets thawed out from the future! 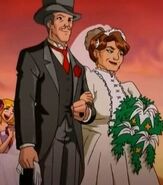 Jerry Lewis with Sparky in "Arnold The Great".

"I Hate The Eighties" (Remastered Edition)

Jerry looks blonde and nostalgic in "I Hate The Eighties".

With Alexandra from "Fashion Faux Pas"

Jerry with Blaine in Baddies in a Blimp

Jerry trapping the spies with a WOOHP Agent standing beside him

Jerry and Terrence Lewis as kids from "Evil Promotion Much?"

Jerry and his brother Terrence Lewis at age ten.

"Boy Bands Will Be Boy Bands"

Jerry Lewis in episode "The Granny"

Posing as the spies' father.

"Forward to the Past"