Terrence Lewis is Jerry Lewis's twin brother. He is shown to be intelligent and he modified his face through plastic surgery to differ from his twin. In the Season 3 finale "Evil Promotion Much?", the spies were selected for promotion to the next level due to their records, and were sent to Terrence for the training they would require to become Super Spies.

Terrence appeared to be a relaxed administrator, but later revealed his evil nature to them. His motive was that when he and Jerry were at Clothsworthy Academy, they cheated by sharing answers during exams. However, when they were caught, Jerry blamed his brother and Terrence was expelled.

Terrence attempted to turn the spies and his brother evil in "Evil Jerry", but was thwarted when the effects of his latest scheme wore off.

In Season 4 he created an organization called LAMOS (League Aiming to Menace and Overthrow Spies), an acronym he did not realize it made, made up of many of the spies' enemies, including Myrna Beesbottom, Helga Von Guggen, Boogie Gus, and Tim Scam. He wore 18th-century men's clothing and ran the organization from a leaky submarine. He was later arrested in "Like, So Totally Not Spies".

With Boogie Gus from "Like, So Totally Not Spies".

Tim Scam and his LAMOS crew in "The Dream Teens"

Terrence in "Evil Promotion Much?"

The headshot of Terrence.

Terrence and Jerry Lewis childhood photo from "Evil Promotion Much?"

Terrence and his brother Jerry Lewis at age 10.

Terrence and Jerry Lewis as kids from "Evil Promotion Much?"

With his brother Jerry Lewis. 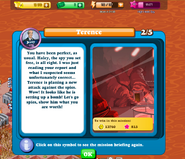 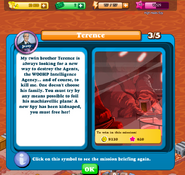 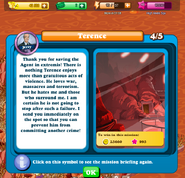 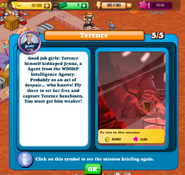