The Dusk of Dawn

The Dusk of Dawn

Strange disruptions around Beverly Hills prompt Jerry to have Sam, Clover and Alex check things out. And when they do, they find that 2 otherworldly men are battling it out in the streets, searching for a mythical Heart of Grentoid. Alex immediately knows what this means. Somehow 2 characters, Cheston and Durlock, have escaped from her favorite movie, "The Dusk of Dawn!", and brought their feud to the real world! It's up to the spies to save Beverly Hills and get these battling warriors back into their movie.

In the B-story, Alex meets her real-life movie hero, but ultimately realizes they are from 2 different worlds, literally.

Durlock climbs the side of a mountain in the snow.

Sam uses the Crim Cam Catcher to capture a baddie.

Sam captures a robot with the Crim Cam Catcher.

Usher drops the garbage bag so he can comb his hair. 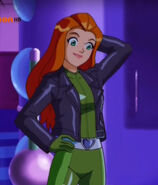 Sam in a leather jacket.

Sam in a leather jacket trying to look bad.

Cheston sits on a "carriage".

Durlock does a vanity check at a street in Beverly Hills.

Durlock finds it curious that dogs are being carried in purses.

Cheston consults a map to the stars.

Jerry Lewis as a compowder hologram. 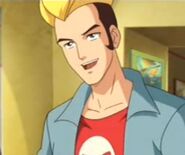 First appearance of the punk-looking Usher.

Usher has a panic attack.

Samantha dumps the usher after realizing he's a wimp.
Community content is available under CC-BY-SA unless otherwise noted.
Advertisement