Grabbing the Bully by the Horns

The Wedding Crasher is episode 7 of Season 6.

A gala wedding is in full swing when the bride's wedding dress has a most sinister malfunction, leaving a wake of chaos in its path. Jerry puts the spies on the mission and they quickly discover that this is not an isolated event. Someone is rigging designer wedding dresses to destroy the brides-to-be's big days! That someone turns out to be Wera Vann, a bitter dress designer who is bent on getting revenge on the world who rejected her designs. Can the spies stop her before she destroys a royal wedding?!

In the B-story, Sam tries to find a unique gift for her parent's twentieth wedding anniversary. In the end, Jerry comes through for Sam by taking Sam's parents on an amphibious bicycle tour of London, which her parents love.

Sam stressing over what to get her parents for their 20th anniversary.

Chibi Sam and her parents. 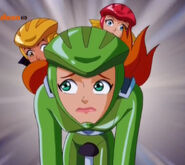 Alex fields a phone call on the WOOHP-a-Trois 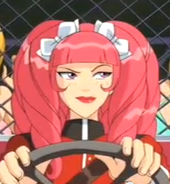 Gabriella and her husband thank Sam for their present.

The WOOHP-a-Trois is amphibious.
Community content is available under CC-BY-SA unless otherwise noted.
Advertisement