Tim Scam is a supervillain and one of the series' main antagonists. A former agent of WOOHP, he has great skill in combat, espionage, and weapons development. Scam has repeatedly shown himself to be one of the spies' most dangerous enemies.

Tim Scam is a former WOOHP employee who was fired for illegal use of weaponry. He seeks to get revenge on the organization as a result.

He was introduced in "The New Jerry", in which he kidnapped Jerry Lewis and replaced him to use WOOHP for his scheme. Samantha also developed a strong crush on him before she discovered he was her enemy. It can also be noted that in the Spanish version of the same episode, during the scene where Sam discovers Scam's true identity and he stuns her with the Immobilizing Stun Tan Lotion while she's running away, he says, "Por que tienes tanta prisa, linda?" which in English means "Why are you in such a hurry, beautiful?" This could just be because Spanish is a very romantic language to begin with, but to have Scam come right out and call Samantha "beautiful" when he's never said anything of the sort to any of the other spies provides some key evidence that Scam has a romantic interest in her as well.

In "Mommies Dearest" he attempted to get revenge on the girls by brainwashing their mothers into nearly killing their daughters. In "Morphing Is Sooo 1987" Tim attempted to destroy WOOHP using liquid metal Scamlar robots capable of mimicking the appearance of others by copying a person's DNA simply after touching them. Tim reappeared in Season 4 and became a member of the LAMOS (League Aiming to Menace and Overthrow Spies), headed by Terrence Lewis.

Tim Scam is highly intelligent. He originally developed the Evapoblaster, a heat ray capable of evaporating the Earth's oceans, while working for WOOHP. Unlike the majority of the show's other villains, who typically plan crimes around a single "theme" based on an event from their past; Scam comes across as completely sane (albeit sociopathic). Also, unlike the other villains, whose plans generally involve indulging in their twisted obsessions (e.g. brainwashing, transforming people, and/or taking them as a consort to sit beside them in power), Tim goes straight for the kill, literally.

In his introductory episode, Scam reveals his reason for turning on WOOHP. While his file indicates that he was fired for illegal use of WOOHP technology, Scam tells Sam, Clover, and Alex quote, “WOOHP never appreciated me for the genius that I am,” revealing some bitterness towards the agency and Jerry Lewis for how he was treated during his career working with them. In the German dub of the same episode (“Der Neue Jerry“), he says that his “work was not properly acknowledged by the organization” indicating instead that there may have been some misunderstanding or mix-up that led to him being fired instead of sheer wrongdoing on his part.

In ”The Fugitives” and ”Return of Geraldine” Jerry is proven guilty of having such misunderstandings when it comes to his agents as he passes immediate preliminary judgement when the spies are accused of a crime instead of reasoning through facts and thinking of other options. A co-worker could have stolen the credit for an invention from Scam. When Scam discovered this theft and complained to Jerry, the co-worker counterattacked with a verbal accusation that exploited Jerry's flawed judgement and exploited Scam's need to hold a vendetta. After being fired, Scam could easily have gotten revenge by creating his own corporation and spreading rumors of Jerry's behavior but perhaps by then he was too angry and upset to formulate any rational plan for a comeback. In "Star Wars: Episode I: The Phantom Menace" Finis Valorum is voted out in part because of the unfounded rumors that have damaged his credibility.

Personality wise, Scam comes across as witty, cocky, and a little rude as he often teases the spies with sarcastic comments just to get them riled up, as seen in "Morphing Is Sooo 1987". He also refers to G.L.A.D.I.S. as a "metallic piece of trash" in the same episode upon their first meeting.

But in spite of mostly acting in a inconsiderate manner, Scam has shown some regard for other people's feelings most notably in the episode "The New Jerry". After Samantha reveals her crush on him, despite having her trapped and having the clear opportunity to laugh at her over her feelings for him (her enemy) especially now that his plan is close to reaching fruition, he doesn't humiliate her. Instead he chooses to say nothing about the matter and lets her get her confession out of her system without commenting on it at all. He also never once came back and nagged her about her crush in a later episode. However, as he has only acted in this way explicitly in just one out of his many appearances and that too with only one person, it's questionable if that determines that Scam genuinely can care for others' feelings or if the understanding he showed Sam was just restricted to her for her feelings for him as he never passed up any other opportunity after that to ridicule anyone when given the chance; even Sam just not about the feelings she had for him.

Scam, as also seen in "The New Jerry", has excellent control over his emotions and his body language. Scam has also been shown to be able to effortlessly think on his feet. For example in ”The New Jerry”, he comes up with no less than 2 more plans to eliminate the spies right on the spot after his first plan falls apart.

When taken by surprise, as seen in "Mommies Dearest" and "Morphing Is Sooo 1987", he quickly downplays the shock or uses sarcasm to project the appearance of control.

Scam warrants himself to be attentive and alert, often catching onto things that others miss. One example of this is found in "I Hate The Eighties" where Scam informs Boogie Gus that he failed to hit all of the spies with his Eightifier; a fact which both Boogie Gus who fired the ray, and Terrence who was watching the same live video feed, missed entirely.

Additionally, while working with the LAMOS, Scam insulted every other member of the team at least once over their proposed plans to eliminate the spies, proving himself to be someone who is somewhat condescending and very difficult to impress. He was also the first to state that LAMOS was pronounced "lame-os", thus making fun of Terrence's efforts in coming up with what he had believed was a great name for his new team.

Scam also seems to be somewhat into style and fashion; or at least has some personal taste and ideas on how men should dress and carry themselves. He found the purple and yellow suit that Boogie Gus wore in “I Hate The Eighties” to be only fit for a “costume party”. He is seen looking at his reflection in a mirror and giving himself a once-over while smiling in approval while he dons a Spacesuit in ”The New Jerry”. Additionally, he told the spies that “a little style never hurt” in “Morphing Is Sooo 1987”. This could be a remnant of his WOOHP career as he could have been influenced by Jerry's professional dress code requirements. In “Wild Style”, Jerry mocks Clover's shoes. In “Evil Promotion Much?“ he agrees with Clover that Samantha quote, “looks like a couch” in her new outfit.

The cashmere sweater Sam buys for Scam on display.

Scam's fingerprints from "The New Jerry"

technical drawing of the Evapoblaster and Scam's development notes. 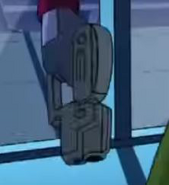 Tim Scam with a Laser Handgun

Scam about to make his first appearance.

Samantha expresses her disapointment to Scam over his being her enemy because she had gained feelings for him.

Stunned at finally realizing Sam's feelings for him after her confessing her crush on him.

Scam escaping through the sewers in "Mommies Dearest"

Tim Scam with Clover and Alex in "The New Jerry"

Tim Scam in a WOOHP Spacesuit

Tim Scam evaporating the earth's oceans with the Evapoblaster

Scam as "Mac Smit" in "The New Jerry"

Angry Scam from "The New Jerry".

Flashback of Scam's past from "The New Jerry"

Tim Scam with Stella and Gabriella

Tim Scam reclining at his hideout in "Mommies Dearest"

Tim Scam about to be pummeled by Stella, Carmen, and Gabriella in "Mommies Dearest"

Sam grabs Scam's leg to try and stop him from escaping.

Tim Scam in the episode "Morphing Is Sooo 1987"
Images.jpeg
Tim Scam with a liquid metal Scamlar robot that has taken on the appearance of Sam.

Insulting the spies from "Morphing Is Sooo 1987"

Scam making fun of Clover from "Morphing Is Sooo 1987".

Scam smirking while being arrested in "Morphing Is Sooo 1987"

Scam with the Scamlar Samantha.

Tim Scam in the LAMOS sub with Helga Von Guggen

Close-up of Scam in the LAMOS sub 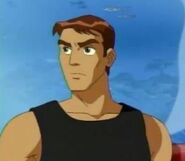 Scam being inducted into the LAMOS.

Scam about to insult Boogie Gus.

Scam and Helga from "Evil Jerry"

Scam about to facepalm in reaction to Helga Von Guggen's lame plan along with his comrades.

A shot of Tim Scam sitting on the couch through the LAMOS sub window.

Glancing up at Boogie Gus's arrival.

Scam looks visibly hurt as he recalls his past in "The New Jerry".

Scam with Terrence Lewis in "I Hate The Eighties"

Scam bringing to light the mistake Terrence made in naming the group.

Scam in the LAMOS sub with Terrence Lewis and Boogie Gus.

About to be unmasked.

Scam's disguise is blown off from "Morphing Is Sooo 1987".

"You only hit two of them." 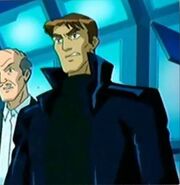 Angry Scam clone about to attack from "Morphing Is Sooo 1987"

Tim Scam smiling to himself from "Morphing Is Sooo 1987"

In a space suit from "The New Jerry"

Captured from "The New Jerry"

Scam working on an experiment in "Evil Jerry" 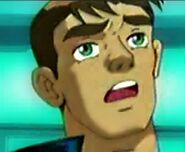 Making his entrance from "Morphing Is Sooo 1987".

Tim Scam from the graphic novel of "Evil Jerry".

Carrying out an experiment.

Scam's in reaction to being asked why the Scamlar Sam is acting like the real Sam.

Scam startled by Terrence Lewis' outburst from "The Dream Teens"

Running past Samantha in "Mommies Dearest".

Standing on top of Jerry's desk from "Morphing Is Sooo 1987".

With Jerry's Scamlar clones from "Morphing Is Sooo 1987".

Scowling at Terrence's suggestion that he needed his help to break out of jail.

Showing off his driving skills.

Scam turns the Anti-gravity cycle on its side while shooting.

Sneaking up on the spies when they thought they had lost him.

Facing all four spies in Escape From WOOHP Island.

Close-up from "The New Jerry".

Scam in the games. 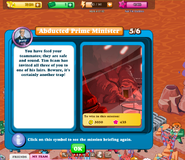