In the episode's opener, Jerry is working on a invention that can help defeat evil in the basement of his mother's home. The invention gets a malfunction and Jerry is convinced that he is useless. Jerry's mother arrives with the tea and the gene from Jerry's useless invention gets to her tea. Meanwhile, in Malibu University, the girls return from shopping, but Mandy takes over their parking spot. Not to be beaten by Mandy, the girls park their car in the same spot. Later in WOOHP, a mysterious man called Mr. X calls to Jerry and makes an offer with him.

Back at Malibu University, the girls show off their new clothes and are still thinking about Mandy's attitude. The girls then get WOOHPed to Jerry's office. Jerry tells them that he is selling WOOHP to mysterious Mr. X and the agents will be replaced by robots. At first, the girls don't believe him, but they get upset when they find out that they'll retire from being spies. Jerry tells them that he became useless and needs to retire. He also says that he'll live with his mother since his retirement. Upset, the girls tell Jerry that although they are complaining, this doesn't mean that they don't want to be spies again. Jerry tells the girls that a jet has taken off without a pilot and sends them to see how the robots work, but the girls decide to show that they're better than the robots.

Somewhere in the sky, the girls try to catch the jet, but the robots arrive and catch the jet before the girls can. Jerry WOOHPs them to the WOOHP jet. The girls begin to cry that their adventures as spies are over. Jerry tells them that they can see each other. The girls return their gadgets, but they keep their uniforms and their penthouse. Jerry WOOHPs them back to Malibu University.

Back in Malibu University, the girls see Mandy trying to push their car out of the parking spot. The girls try to stop her, but she slips and lands under the car. The girls get Mandy out. Mandy sees that she broke her nail and passes out. Unconscious, she remembers the bad deeds that she has done to the girls. Mandy wakes up and becomes happy to see the girls. Mandy tells them that she realized how mean she has been and has decided to become good. The girls are totally confused.

Later on, the girls arrive at Rodeo Drive to buy shoes. However, Mandy pays for the girls' new shoes. On the way back to Malibu University, a thief steals the girls' shoes. The girls try to catch the thief, but they see the robots and decide to let the robots to catch the thief. However, the robots become lazy. Soon, there is a crime spree in Beverly Hills. The girls decide to call Jerry. Alex sees a telephone booth. She tries to call Jerry, but thieves take over the booth.

The girls return to their penthouse and see that it's clean. It turns out that Mandy has cleaned the penthouse up. The girls call Jerry and tell him what's going on. Jerry is confused. However, something strange happens and Jerry gets cut off. This worries the girls.

The girls go to Jerry's house to save him. They see that there's a huge hole in the wall and Jerry is missing. The girls look around the house and find the backpack full of Jerry's gadgets. Mandy arrives with the cookies for the girls. She sees the hole and decides to fix it. Outside, the girls wonder what will they do. However, the robots arrive and attack the girls. The girls discover that the robots are evil. The girls try to attack the robots with Jerry's gadgets. Unfortunately, all of his gadgets are useless. Mandy sees the situation and yells at the robot for attacking the girls. The robots soon kidnap Mandy. The girls chase them to England, but they lose them.

The girls, Jerry, Britney, Dean and Blaine arrive in London and see the robots. A huge battle begins. However, Jerry, Britney, Dean and Blaine are attacked, but the girls rescue them. The robots capture them and they dive. Jerry explains that the girls will run out of the oxygen if they don't return to surface. The girls get back to surface. The other robots merge into a huge robot. The robot captures the girls. The girls use their jetpack backpacks to escape. The girls defeat the robot and save the world.

Back at Jerry's mother's house, Jerry says that he wants to retire. The girls are upset, but say that they'll be spies forever. However, Mandy finally finds out that the girls are spies and returns to her snobbish self because she believes that "friends shouldn't keep secrets from each other". The girls decide to not erase her memory. Mandy demands them to get her back to Malibu University. The girls put one of Jerry's mother's jetpack backpacks on Mandy's back. They activate it and Mandy flies back to Malibu University. Later on, the girls and Jerry part ways, promising to see each other again.

The Spies and Jerry crying 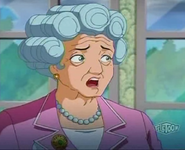 Mandy finds out the girls are spies

Jerry Lewis overcome with emotion when Sam, Clover, and Alex tell him that he's like a grandfather to them.