Women across America keep going berserk and attacking men and unaffected women. All of the berserkers turn out to be descendants of an ancient guild of warrior women, the Sisterhood, who intend to eliminate all men and inferior women. They failed in the past, but someone's reviving the idea by using their descendants and Sam's one of them.

In the B-story, Clover decides to be a club member of a secret club named MIG, but she doesn't know that MIG stands for "Mandy Is Great". 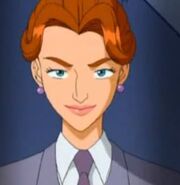 Jerry asks Dina if they should have some tea.

Sam dressed by the Sisterhood