When Jerry informs the girls that they're once again setting sail aboard the WOOHPtanic, Sam, Clover and Alex are psyched - figuring they'll be able to enjoy the ship's posh amenities once their boss is done with the big gadget presentation he has planned. But things quickly go awry when the ship is unexpectedly attacked by Salty Schooner - an evil pirate bent on making the vessel his own! Though Sam and Alex are able to escape, Clover isn't so lucky, and soon finds herself not only captured, but also the object of Salty's affection. It's up to the girls to not only get the ship back, but also stop Salty from using one of Jerry's gadgets, The EROS (or Electromagnetic Radiator for Overhearing Stuff), to supercharge the sun, melt the polar ice caps, and flood the world; turning it into a pirate's water-world paradise!

In the B-story, Clover tries out a new look called "pirate chic"; Salty notes how good-looking she is in her clothes when he chooses her to be his pirate queen.

About to walk the plank. 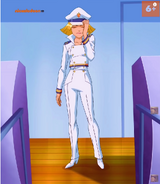 Mandy and Trent in their pirate chic outfits.